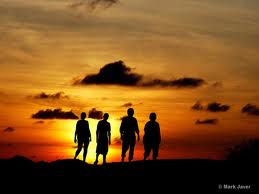 Many years ago I sat in my car on the top of a mountain with a friend. The view was expansive; you could literally see for miles – lush green forests as far as the eye could see under a clear, blue sky punctuated with the occasional floating white cloud. She posed a question: “Do you see that horizon, that place which we cannot see beyond?”

I thought for a moment, not fully comprehending the profoundness of her statement and how it would stay with me for the rest of my life. Now I realize we live our lives surrounded by horizons, seeing so easily what is in front of us but not actually seeing beyond. Yes, we may think we do. We make elaborate plans for our future and believe we know what lies ahead. We may have been there just moments ago, but do we truly ever know what lies beyond our immediate line of sight?

Yesterday afternoon my wife and I were driving home from a short trip when I looked up and noticed a ridge of mountains ahead. It formed a horizon so clear and vivid that I pointed out how the mountains ended in a skyline and how even though we couldn’t see what was on the other side, still we may think we know what’s there. The truth is the other side of the horizon is never attainable because it’s always moving away from us. As we move, it moves, and we never really know what lies ahead because we will never reach the end.

I like to think this helps explain our purpose on earth – the realization that even though we cannot see what lies beyond the horizon, we should never be afraid of reaching the other side.

I was planning on taking the weekend off – watch football, eat chocolate, drink coffee. Just relax and enjoy myself as a way to clear my head. I felt that might get my creative juices flowing again. Then I came across this quote by Orhan Pamuk: “I read a book one day and my whole life was changed.”  Suddenly the mists of recollection rolled in and I was transported to another time and place…Kenitra Morocco 1964, Naval Air Station Kenitra and the base library, where I worked as a part time (sixty-five cents per hour) librarian.  My main job was being an air traffic controller. The library, like air traffic, was often slow and working 24 on/48 off afforded me lots of free time. So what does a librarian do when things are slow? He reads. At the time this was more than a stretch for me – it was a leap. Reading was a chore, something I did because it was a requirement. Remember that high school reading list for college-bound students? It was enough to ensure that most of us never read again.

It was in the Kenitra library that I started reading to learn, to enjoy, and get lost in books. Books could take me anywhere in the world; more importantly, that’s where my love affair for books really began to blossom. I met people who loved to read and had many book-related conversations in the library. It was on one of those slow nights that I came across “The Pumpkin Papers” by Whittaker Chambers, a story about the famous American spy who was instrumental in forming the United Nations, all the while being a spy for the Soviet Union. I had an epiphany from that book: that knowledge is boundless and that the truest knowledge is right at our fingertips…in classic American and English literature, as well as classics from other nations translated into English.

It was then that I read “Atlas Shrugged.” I discovered Henry Miller’s books, then banned in the USA, and – to my amazement – “The Story of O.” In comparison, “50 Shades of Gray” is just a modern rehash. “The Story of O” was written in the 1920s, also by a woman, and is the true classic in the genre.

Like Orhan Pamuk’s, my whole world changed from a book. In a small Moroccan library. Back in the mid-1960s.  Thankfully, it’s never been the same.

I Think Santa Claus Is A Woman…

I hate to be the one to defy sacred myth, but I believe he’s a she. Think about it

Christmas is a big, organized, warm, fuzzy, nurturing social deal, and I have a tough time believing a guy could possibly pull it all off!

For starters, the vast majority of men don’t even think about selecting gifts until Christmas Eve. It’s as if I hate to be the one to defy sacred myth, but I believe he’s a she. Think about it.

they are all frozen in some kind of Ebenezerian Time Warp until 3 p.m. on Dec. 24th, when they – with amazing calm – call other errant men and plan for a last-minute shopping spree. Once at the mall, they always seem surprised to find only Ronco products, socket wrench sets, and mood rings left on the shelves. (You might think this would send them into a fit of panic and guilt, but my husband tells me it’s an enormous relief because it lessens the 11th hour decision-making burden.) On this count alone, I’m convinced Santa is a woman.

Surely, if he were a man, everyone in the universe would wake up Christmas morning to find a rotating musical Chia Pet under the tree, still in the bag. Another problem for a he-Santa would be getting there. First of all, there would be no reindeer because they would all be dead, gutted and strapped on to the rear bumper of the sleigh amid wide-eyed, desperate claims that buck season had been extended. Blitzen’s rack would already be on the way to the taxidermist. Even if the male Santa DID have reindeer, he’d still have transportation problems because he would inevitably get lost up there in the snow and clouds and then refuse to stop and ask for directions. Add to this the fact that there would be unavoidable delays in the chimney, where the Bob Vila-like Santa would stop to inspect and repoint bricks in the flue. He would also need to check for carbon monoxide fumes in every gas fireplace, and get under every Christmas tree that is crooked to straighten it to a perfectly upright 90-degree angle.

Other reasons why Santa can’t possibly be a man: – Men can’t pack a bag. – Men would rather be dead than caught wearing red velvet. – Men would feel their masculinity is threatened…having to be seen   with all those elves. – Men don’t answer their mail. – Men would refuse to allow their physique to be described even in jest   as anything remotely resembling a “bowlful of jelly.” – Men aren’t interested in stockings unless somebody’s wearing them. – Having to do the Ho Ho Ho thing would seriously inhibit their ability   to pick up women.

– Finally, being responsible for Christmas would require a commitment. I can buy the fact that other mythical holiday characters are men………

– Father Time shows up once a year unshaven and looking ominous.  Definite guy.

– Uncle Sam is a politician who likes to point fingers. Any one of these individuals could pass the testosterone screening test. But not St. Nick. Not a chance. As long as we have each other, good will, peace on earth, faith and Nat King Cole’s version of “The Christmas Song,” it probably makes little difference what gender Santa is. I just wish she’d quit dressing like a guy!!!

On a recent trip to the UK, my main objective was to explore Rosslyn Chapel in Edinburgh, fraught with Templar and Masonic history as well as notoriety from The Da Vinci Code and special interest to me as regards my book The Red Serpent. The night before the tour we were cheaping it out at a London McDonald’s, when the fellow at the next table joined our discussion. Turns out he was a long time Mason who visits the Chapel frequently, and he pointed out many key features we shouldn’t miss. Before we all left, he and I shared the secret Masonic handshake. Later, my wife declared the man resembled the actor Jake Weber from TV’s “Medium.” I thought not, but she googled that Jake Weber is indeed a London native who had recently participated in a Masonic celebration in LA. So who knows?

In chilly Edinburgh weather several days later, armed with even more incentive to visit Rosslyn, we went to meet our huge, full-size expedition bus for the only tour that week. We soon discovered we were two of only three on the roster! Our driver explained that normally a group of three on a bus this huge would be cancelled, but for some inexplicable reason this day it would run as scheduled.  We sat right near the very personable driver, who turned out to be vastly interesting and informed on centuries of Rosslyn history, legend, and myth.

Due to a confluence of serendipitous situations, our visit to Rosslyn Chapel had been staged and carried out against all odds. For this I will always be grateful to the universal powers that be.